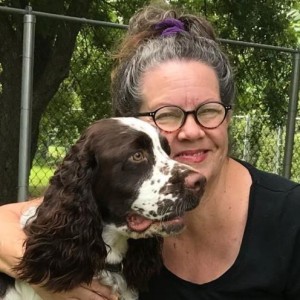 What comes to mind when you think of chickens? Eggs?  A pastoral farm?  You probably don’t immediately think of a trained chicken running an agility course or retrieving.  However, there is an elite group of animal trainers in the world who learned from Bob and Marian Bailey through chicken training to use behavior science with the greatest of precision.  They include marine mammal trainers, horse trainers, parrot trainers, and of course dog trainers of all specialties.

All animals learn; if they don’t, they don’t last long on this Earth.  Training is the human way of manipulating WHAT they learn, and any species we live with is a product of our training, whether we are aware of our influences or not.  Taking on the training of a species we are unfamiliar with can open up our thinking to possibilities we had not considered before.

A large part of my animal training education came from training chickens with Dr. Bob Bailey over a period of about fifteen years.  Dr. Bailey is a huge influence on my training and indeed, my life, but I won’t go too deeply into that here; suffice it to say that what I learned from Bob was behavior and training information that you just don’t run into every day.  I learned about myself and the barriers I had placed between myself and my success, how to use my own behavior to influence the behavior of others, and yes, how to train a chicken – although chicken training was simply a vehicle for lessons in my own awareness and skills to control my own behavior.

What Can Chickens Learn to Do?

Chickens, like all animals, already know how to learn.  They eat, drink, sleep, play, reproduce, and more, all on their own, without human input.  They learn quickly and efficiently.  Chickens do not, however, know the detailed rules of how humans will be training them – you have to teach that first. You also have to practice your own skills before getting into more precise behaviors.

What can chickens learn to do?  Oh, so much!  But let’s begin with what I learned from training chickens with Bob.

It’s not just putting treats into an animal’s mouth.  Placement of reinforcement and removal of the hand that brings it can enhance the behavior you’re working on and not unintentionally build a behavior you don’t want.  Or, you can just give treats willy-nilly and hope for the behavior you want!  (Guess which one works better?!) Good training happens in the finest of details.

The author and a partner run a White Leghorn hen through a course including weave poles, a tunnel, and an A-frame.

Speed is Part of the Behavior

If you want speed, give the reinforcement so that you build speed; don’t slow the chicken down or stop it unnecessarily.  Build in the speed from the beginning – walking and running are two different behaviors.

How hard do you want your chicken to peck an item?  Strongly enough to knock it off of a shelf?  Gently, so it moves along a pre-defined path?  Do you want the bird to pick something up and bring it to you?  Shaping is the way to build a definitive behavior from an initial hint.

Where is the correct starting point for the behavior?  Consider where you started last time. When teaching a dog to fetch a ball, do you begin by throwing the ball across the back yard? Maybe not – it might be best to start with the ball closer to the dog so there’s not as much room for distraction.  Where can you start to ensure the animal’s (and your own) success?

You have to understand the species you’re training.  It’s easy to tell when a chicken is starting to get full and will soon no longer be interested in the food you’re using for reinforcement; just watch her crop filling up as she eats.  With your dog, you have to get to know behaviors that tell you he’s getting full, although dogs have much larger stomachs and filling up may not be a big deal with any dog bigger than a Chihuahua.

If you want to teach discrimination between colors, you need to know what colors the animal can see, or more accurately, that they can tell the difference between the colors you’re offering.  How visual is the species?  And that particular animal?  Is there any vision loss?   As long as they don’t have any vision loss, chickens can discriminate between shapes easily and see colors well.

Pecking a Target on Cue

Cues can be Visual, Auditory, Environmental, and More

Cues do not have to be words.  In training chickens, orange cones on the table were the cue for the chicken to run around them in an oval pattern.  Grey metal cans were the cue for running in a Figure-8 pattern. A laser pointer was the cue for the chicken to peck a dot on a vertical surface.  Of course, the table upon which training occurred was an environmental cue that reinforcement would be available.  On the table, the chicken watched for other cues to appear that helped her work out the puzzle of what behavior she could perform that would give her the opportunity for reinforcement – the trainer’s position, a feed cup, or other pieces of training equipment – maybe even the timer and the trainer’s notebook! You never know what an animal is perceiving as a cue in the environment.

Your dog or cat does the same thing at home, all the time!  Certain rooms have meanings for your pets and are therefore environmental cues.  Opening the refrigerator or pantry, or picking up a food bowl, can mean dinner is on the way.  The presence of a harness and leash, approaching your car, or walking toward the front or back door all bring additional environmental cues into play so your dog can figure out, step by step, what behavior he can perform that will get him the reinforcement he knows is available.  Do you like what you’ve trained??

My husband and I recently trained our African Grey parrot, Jane, to voluntarily take a prescribed medication.  Just as in chicken training, we set up the environment to help get the behavior we want from the animal.  We place the syringe full of medicine in a predictable spot that is easy for Jane to reach.  We click for action, feed for position:  Click when her head moves toward the medication – consider the trajectory of her tongue toward the place where she’ll lick the liquid from the syringe.  Feed away from the syringe so she is set up to repeat the same loop of actions.

Goats and Other Hoofed Animals

Again, you do have to know the species you’re training.  Dolphins, for instance, need to be in the water (obvious but very important!)  For some behaviors, you need to be in the water with them; for others, it’s better to be on the deck.  Plan each factor of the training session to give you the best chance of success.  It’s helpful to know what behaviors have already been reinforced so you can use them – or not, as the case may be.  Thanks again to Dr. Bob Bailey, I was fortunate enough to get to train some dolphins in 2021.   Their handlers explained the behaviors they knew well, ones they were working on (which we novices got to help them with!) and in a few cases, ones that we were NOT to cue or reinforce because a dolphin had developed a behavior that was undesirable.

You often see dogs jumping up on people, which is highly undesirable, potentially dangerous, and certainly a behavior that can soil or damage one’s clothing.  As mentioned above with dolphins, you will want to plan to AVOID reinforcing that behavior and reinforce some other behaviors – behaviors the dog can choose to get what he wants, but that are OK with the humans also.  Dogs, dolphins, goats, parrots, chickens – they all learn in the same way, you just have to know the particulars of the species and the individual’s capabilities to proceed.